Changing 'face' of smartwatches: How are the fast-evolving budget smartwatches shaping up?

According to Techarc’s Wristables Shipment Report, the market volume for entry segment (under Rs. 3,000) smartwatches witnessed tremendous growth of 439% QoQ in Q1, 2021.

Techarc did a Wax-Wane Analysis of the most-desired features and categorised them into waxing, prime and waning features for a deep dive.

Figure 1 shows Wax-Wane Analysis of smartwatches in the entry segment. 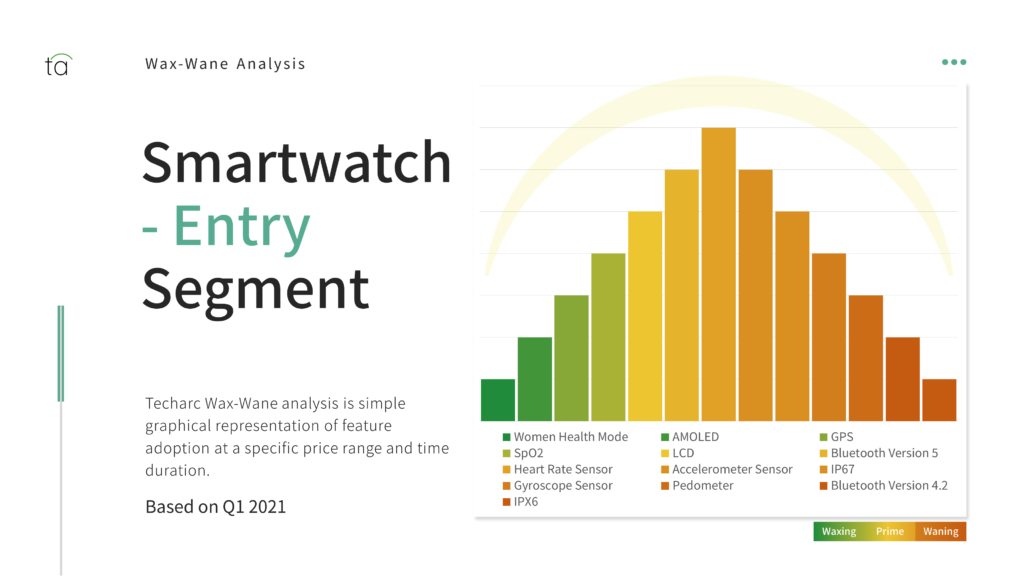 Health trackers: SpO2 monitoring tells the blood oxygen level and it is the fastest-growing and the most popular feature in smartwatches. At least 39% of smartwatch models shipped in the India arrived with an in-built SpO2 feature. Women’s health tracker is the least popular waxing technology in the entry-level smartwatch market. The pedometer, often called step-counter, is the least talked-about feature in health tracking, as shown in figure 1. The steps counter has reached the limit of its usefulness and no longer adds any new value, but it is still relevant.

Display: The AMOLED display is a waxing feature but 54% of smartwatch models still offer LCD devices.

Sensors: The list of sensors primarily includes heart rate sensors, accelerometers, and gyroscope sensors are fall under prime category. Although the accuracy varies between make and models, these sensors are must-haves.

Features like eSim and NFC are yet to enter the entry-segment.

Techarc’s Wax-Wane Analysis is simple graphical representation of feature adoption at a specific price range and time duration. It is a quarterly analysis that highlights the most desired and popular features. This analysis is classified into three categories:

Waxing: This term refers to the technologies and features that are becoming more relevant in the specific category.

Prime: This includes features that have become an industry standard and are a must in a category.

Waning: These are the features gradually becoming obsolete, or companies are removing these features belonging to a category.

Techarc – Technology Analytics, Research & Consulting is a new technology market research firm offering insights and information services to decision-makers. It provides them a neutral and unbiased perspective about the market, product, or service. The focus areas of Techarc include Consumer Tech, Deep Tech, Digi Tech, Edu Tech, Auto Tech, and Assistive Tech. In addition, Techarc offers subscription-based services as well as executes ad-hoc research projects in these domains. Leveraging advanced technologies (Restech), Techarc’s research presents a holistic view of the market, product, or service in the fastest possible time with neutral perspectives about the business problems and challenges to support forming growth strategies for businesses.

All research and content is owned by Techarc © All rights reserved. Reproduction without explicit permission is prohibited,